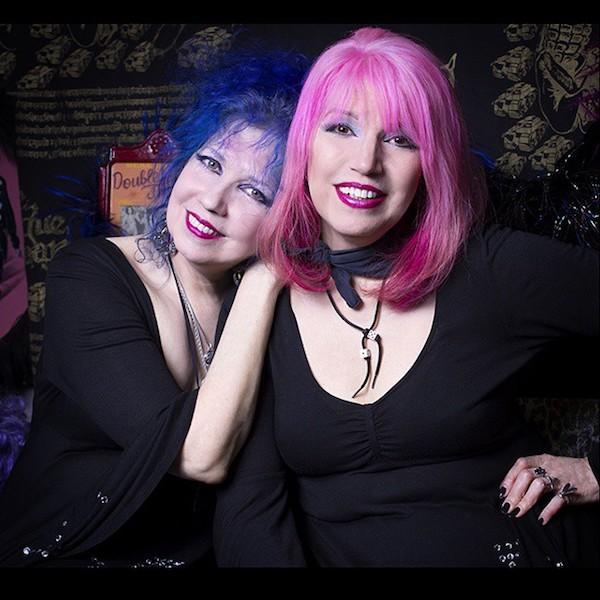 Patrice and Eileen Bellomo are more commonly known as Tish and Snooky. They are co-founders and co-CEOs of Tish & Snookys® Manic Panic ®NYC, a privately women-owned and operated beauty company. For the past 40 years, they have grown the company their way without investors and with no one telling them what they could and couldn’t do.

On August 29, 2017, Tish and Snooky were honored by JP Morgan Chase & Co. with its Chase Small Business Spotlight. And where was the spotlight?  During a Chicago Sky vs. New York Liberty basketball game at Madison Square Garden. I would say celebrating 40 years of being in business in front of thousands of people is pretty cool.

Tish and Snooky were first inspired by their strong single mother, Estelle, a wonderful artist who sold enchanting drawings to publishers of children’s books, greeting cards, and the like. She taught them strong values: to believe in themselves and to express themselves freely. Estelle enrolled them in Girl Scouts where they soon learned the art of selling and creating the Girl Scout entrepreneurial spirit.

The sisters had big dreams and were not afraid to follow them. Tish and Snooky began performing as children. Their first gig was for a butcher shop. They were paid in bologna.[1] Tish and Snooky did not have much money so they designed and sewed their own costumes often with trim, tinsel, and glitter. As teenagers Tish and Snooky were passionate rock ‘n’ rollers, singing and dancing to their well-informed record collection. They fell in love with “show business” and developed a unique flair for fashion and style. It was really exciting an exciting time to be a teenager in New York City and the Bronx!

The First Punk Rock Boutique in the U.S.

In 1973 the sisters took their first trip to the UK. Rock ‘n’ roll had completely taken hold of their souls.  When they returned to the States they began adding some British punk styles to their look. They also joined  “Blondie,” as backup singers. People loved their clothes and always want to do know where they could find them. The girls decided to open a boutique and sell people what they liked.  On July 7, 1997, in New York City’s East Village at St. Mark’s Place, Tish & Snookys® Manic Panic ®NYC opened.  The rent for their shop was only $250 per month!

The sisters stocked their shop with clothing not found anywhere else: spike-heeled stiletto boots, fishnet stockings, vintage 50’s clothing, and theatre cosmetics. Tish had a degree in fashion design and often showcased her own designs in Manic Panic. Tish will tell you she “put opalescent powder on my lips when performing in our band when we began performing in the 70’s—we mixed stuff up together to make things that really weren’t sold.”

The Mecca of All Things Rock n’ Roll and Punk

New Yorkers and tourists took to Manic Panic® quickly including rock legends: Debbie Harry of Blondie, Bruce Springsteen, and Cher.  The shop became the Mecca of all things rock n’ roll and punk.  It eventually became the best place in New York City to find out where bands were playing.

Rents increased over the years on St. Marks Square. Tish and Snooky had to close the original Tish & Snookys ®Manic Panic® store. They expanded into a warehouse space owned by a boyfriend. The business went from retail to wholesaling custom-created hair colors and cosmetics.

Today Tish & Snookys® Manic Panic ®NYC is located in a 14,000 square foot loft in Long Island City, Queens. The business brings in over $5 million in revenue each year. Millions of people around the world including celebrities like Christina Aguilera, Steven Tyler of Aerosmith, and Cyndi Lauper have become fans of Tish and Snooky’s flair for the alternative look in hair color and cosmetics.

Tish and Snooky are living proof that business is not just a serious, boring matter only adults deal with to make money. It is an avenue open to people from all walks of life– from Harvard MBA graduates to punk performers—and a medium to pursue one’s passions.Their lives exemplify the value of hard work and being true to yourself.

Tish and Snooky are icons in an industry that’s often fickle about companies and people worth following. They continue to create new colors and travel the world promoting Manic Panic ®NYC

Giving Back is Part of Doing Business

Manic Panic ®NYC successes have allowed Tish and Snooky to make numerous contributions to their favorite charities and community organizations such as the Make-a-Wish Foundation and the Periwinkle Foundation. They also created a scholarship, the Estelle Bellomo Award for Excellence in Art Therapy, in 1994. Each year, a promising art student studying in the Art Therapy Program, a program created by the sisters’ late mother, is awarded money to further his or her studies.

The Bellomo sisters are great friends of the Girls’ C.E.O Connection.  For the first Realizing a Vision conference in November 2008, they drove over an hour from their store in Venice Beach, CA.  to talk with high school girls on “taking your passion and making it a business.”  They provided funds for the female students of the Academy of Business Leadership to attend the August 2009 Realizing a Vision Conference in Long Beach CA.

Our favorite quote from Tish and Snooky, “You can be or do whatever you want, as long as you’re willing to devote yourself to it. We grew up really poor and started with nothing but built a fabulous fashion company!” They are living proof of what they say.